A great night of jazz and blues old and new celebrating the Femme Fatale.

The Femme Fatale, from Cleopatra and Mata Hari to the Sirens and Salome, is gloriously celebrated in all its feisty glory. Sarah Moule's cool voice and Simon Wallace's immaculate piano bring life to a 1950s New York late-night club jazz set of Cole Porter, Stephen Sondheim, Bob Dylan and others. In this highly original show the British singer takes a look at her favourite 'bad girls' and finds there's more to them than meets the eye. The show includes much of the material from the latest CD, 'Songs From The Floating World' which garnered universal acclaim on its release. 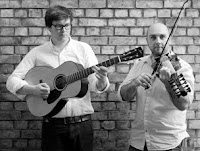 Melding traditional song and dance tunes with new ideas, this inspiring duo create beautifully honed new works steeped in the folk tradition. It is clear that John Dipper (viola d’amore) and Dave Malkin (guitar) are two highly talented musicians who create beautiful music that is both moving and thrilling. They currently hold a creative artist residency at Cecil Sharp House for the English Folk Dance and Song Society.

Superb musicianship. One of the most inspired and inspiring duos I've heard in years. Mike Harding
There aren't many who can sculpt music and song in this way. Late Junction on BBC Radio 3

The Jazz Age was a period in the 1920s in which jazz music and dance styles became popular in Britain. The band recreates this period with a great line up of vocals, piano, drums, bass, saxophone or clarinet and trumpet.
Their huge and eclectic repertoire ranges from Basin Street Blues and Begun the Beguine to Blue Suede Shoes and Bright Star Polka. There's always some space for a bit of ballroom and sequence dancing. So come along, dress in style and have a twenties ball. 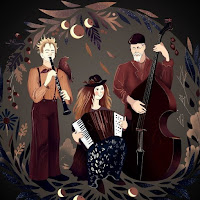 Whiskey Moon Face are an alternative folk trio based around double bass, accordion and clarinet, led by the stunning vocals and hallucinatory lyrics of singer Louisa Jones. This is a beautifully realised and wonderfully entertaining sound. The husky voice of Louisa Jones perfectly presents her quirky songs and wonderful melodies while the jazzy clarinet and saxophone gives great style and thrill to the music. We are really pleased to be able to present this trio, especially as they are regularly touring around Europe.

Songs and tales from the land of the midnight sun

Taking inspiration from some of Sweden's greatest artists, Smörgåsballad is an evening of music and tales from the Swedish Summer. Banish the winter blues by finding out about the tradition of the Easter Witches, of what happens if you pick seven different wild flowers and put them under your pillow at Midsummer, the real meaning of the midsummer majstång and participate in some traditional drinking songs. Be introduced to the ancient cow horn, willow flute, Swedish bagpipes and the ethereal nyckelharpa. A visual treat for the eyes and the ears be transported to the land of the midnight sun. Enjoy some "nordic noir tales": fall in love with the heroes and heroines, at all costs avoid the devil and never cross a nyckelharpa player. Smörgåsbord is a type of Swedish meal served buffet-style with multiple hot and cold dishes of various foods on a table. Smörgåsballad is a Swedish buffet style offering of tales and stories.

Garance Louis. Extrovert, eccentric composer, singer and accordionist from Perpignan who finds a fresh and new way of interpreting the French Chanson tradition with her formidable band The Mitochondries. Her band is a mixture of Tom Waits, Edith Piaf and Frank Zappa, with the melancholy softness of alternative post-musette songwriting. Garance has appeared in the bars and street corners of her adoptive London for 4 years, always surrounded by the most curiously talented musicians she can find.

This is big band jazz, blues and soul that certainly rocks and swings. As a local community band it is based at Uppingham Community College and has about forty members of all ages. The band's repertoire comes from the big band jazz of Count Basie & Duke Ellington; the classic soul of Wilson Pickett, Aretha Franklin, Ray Charles & Stevie Wonder; the hit songs of the 1960s & 70s; the music of The Blues Brothers and The Commitments; and contemporary classics from artists such as Amy Winehouse & Daft Punk.

High craft and verve from this acclaimed new folk trio 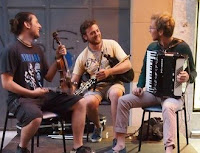 Folk trio Teyr (‘3’ in the Cornish language) evolved out of the London session scene, combining their multiple instruments and voices in every innovative way they can muster. Heavily influenced by the great Irish, Scottish, English and Cornish musicians who've come before, they’ve honed their craft and thrived on weaving diverse threads together. James Gavin (guitar, fiddle), Dominic Henderson (uilleann pipes, whistles) and Tommie Black-Roff (accordion) are three of London’s finest new breed of folk musician.