Returning to one of their favourite venues this amazing band play driving European dance music with their unique and much loved wall of sound. They are now in their 41st year and legends in their own life time. Their music mixes bagpipes, hurdy gurdy, accordion, violin, voices, bass and saxes and whilst firmly based in traditional music is mostly self penned material. Blowzabella will be supported by a short set from Anna Pack (accordion) and Ravi Sawney (fiddle).

Anna (diatonic button accordion) and Ravi (fiddle and nyckelharpa) will lead the workshops and bal. They play a varied repertoire of popular folk dance music from across France, ranging from traditional dance tunes to more recent compositions, and also extending into Scandinavia. From the subtle harmonies of an Auvergne mazurka to the driving rhythms of an Avant-Deux, their music will keep you on the dance floor!

Further details of free camping and accommodation on kettonshowtime.blogspot.com 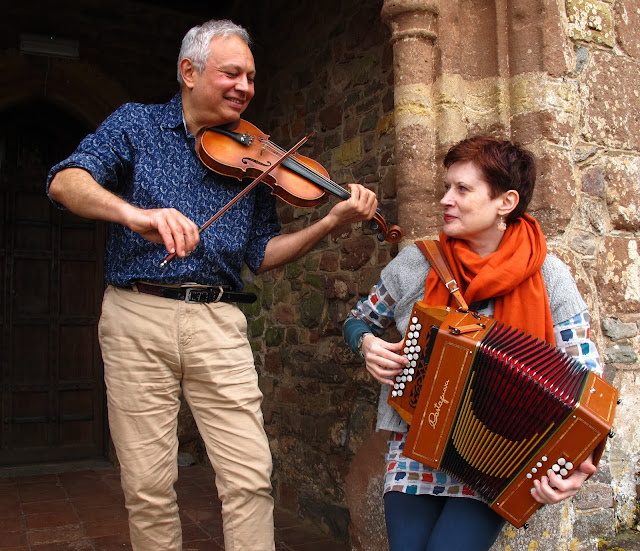 These are a group of young French musicians (bagpipes, violin, guitar) from Morvan region. They mainly explore a repertoire of traditional music from Central France from which they create modern, dynamic and original arrangements. Their repertoire comes mainly from traditional music of their home region of Morvan – Auxois.
http://www.triodmr.com

The Jonny Kerry Quartet is an acoustic ensemble inspired by Gypsy Jazz, New Musette, Classical and Tango music. The quartet performs dynamic and lyrical arrangements of both standards and original compositions that draw upon diverse international rhythms and musical idioms. The Quartet is led by accordionist Jonny Kerry and completed with guitarists Harry Diplock, Ducato Piotrowski & Mike Green on double bass. The band is made up of some of the UK's top musicians in the genre who have performed at hundreds of events throughout the UK.
http://www.jonnykerry.com/jonnykerryquartet.html
https://en-gb.facebook.com/jonnykerrymusic/

This concert includes classical guitarist Steve Bean and two local poets. Steve Bean is a professional classical guitarist. His playing style is predominantly classical with a Flamenco influence, and he continues to learn and develop all aspects of his craft, incorporating classical with traditional Spanish and Mexican styles. His repertoire is varied and encompasses compositions by artists as wide-ranging as Vivaldi and John Williams to more popular pieces by The Beatles, Queen and Lady Gaga.

Our annual New Year French dance introduces a great new trio from France in one of the country's oldest public ballrooms. Trois Pas d'Ici is three young women playing wonderful traditional music from Poitou, as well as the Auvergne and Sweden. With two driving fiddles and diatonic accordion, they produce some great dance music including couple and circle dances such as bourées, mazurka, scottish, valse, etc. And to top it all they also sing in harmony for dancing. As they say “hear our strings (vocal and steel), bellows, keys and bow.” with Nina Lachia and Marie Peyrat both on violin and Lucile Marsac on diatonic accordion, as well as voices and bellows.

Friday 7th February One Voice, One Cello and a Mad Belgian

One Voice, One Cello & A Mad Belgian is a unique collaboration between jazz-cellist and singer/songwriter Rupert Gillett and soprano saxophonist, melodeon player and singer/songwriter Jennifer El Gammal. They delve into jazz, rock, folk, pop and more using only a cello, soprano sax and voice, while at the same time singing songs about robots, space invaders, bogey men and other serious issues of the day.

Rupert was a featured artist at the prestigious New Directions Cello Festival in Cologne, Germany. He also regularly performs in a number of ensembles such as Dai & the Ramblers (Ace Records), She'Koyokh, The London Klezmer Quartet and many more. Jennifer's musical projects include the modern jazz trio Uživati and the unique folk band Virevoltes, featuring melodeon, celtic harp and percussion.
www.facebook.com/events/345147076300974

A highly original and energetic musical force just as likely to move you to tears as to move you to your feet. Frequently referred to as one of the hardest working bands on the scene, The Shackleton Trio is gaining significant UK and International exposure, becoming an in demand name on the folk circuit. 2018 saw plays on Mark Radcliffe's Radio 2 Folk Show, an appearance on Cambridge Folk Festival's main stage alongside a host of UK and European festivals and international tours. The Shackleton Trio are Georgia Shackleton (fiddle, vocals), Aaren Bennett (guitar) and Nic Zuppardi (mandolin).
www.shackletontrio.co.uk

Idumea is an international string quartet specializing in traditional Appalachian folk music played with a chamber music aesthetic influenced by minimalism. Mix fabulous string playing with beautiful harmonized singing and the result is a sound which is as high and lonesome as it is symphonic. Blending tradition, experimentation, and sheer nonsense in roughly equal measure, the Idumea Quartet deconstruct and reconstruct Appalachian folk music, drawing strong influencxes from Minimalism and experimental music.

The Idumea Quartet is: Jane Rothfield and Ewan Macdonald on fiddle, Becka Wolfe on viola, Nathan Bontrager on cello.