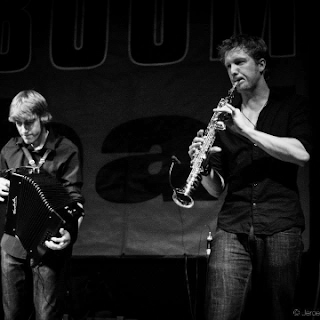 Deya are a young Belgian duo who play traditional dance music from all over Europe especially from central France and Brittany but with a wonderfully energetic and lyrical style. After having played as a duo for four years under the name Duo Goossens-Clerbout they went into the studio as Deya. They have now played throughout Europe but especially at the Boombal Festival in their home city of Gent. Their first CD with guest Ward Dhoore on acoustic guitar. offers a fresh dance repertoire where it is difficult to stick to one particular style. Their songs have a Breton or Swedish influence, which also reflects in the names of their songs such as "Gavotte of my bones".

Deya recently organised a midwinter festival with the Firestarters of Leiden (Simon Gielen together with Nigel Eaton and Dave Shepherd who share a common past in the super group Blowzabella).